Where is the private company capital?

(PitchBook News) Private equity (PE) firms from all across the country (34 states, plus Washington, D.C., to be exact) have 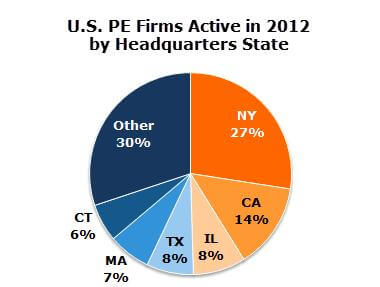 been active this year. In fact, 678 U.S.-headquartered PE investors have completed at least one investment in 2012 to date, according to the PitchBook Platform. Those firms’ headquarters have been largely concentrated in certain areas, with the top three states for headquarters being home to 50% of the firms. New York is by far the most popular headquarters location for U.S. PE firms, with 27% calling The Empire State home base. California comes in second with a 14% share, followed by Illinois at just over 8% and Texas at just under 8%. Altogether, U.S. PE firms have invested in 43 countries in 2012 to date, but those firms have been largely focused on domestic investments, as 84% of their investments this year involved U.S. target companies. California and Texas, both ranked in the top five for U.S. PE firm headquarters locations, are the most active locations for those U.S. deals. The two states each account for about 5% of the global investment activity by U.S. PE firms this year.

Home » Blog » Where is the private company capital?

Make a Payment to BiggsKofford

Warning, this is NOT the Colorado Department of Revenue. This is to make a payment to BiggsKofford, CPA Firm.